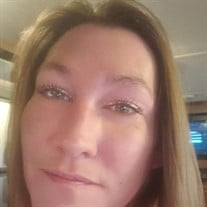 Tammy Sue (Headd) Armer was born on August 27, 1980, in Kansas City, Missouri to Raymond and Mary. She grew up and attended school in the Holts Summit and Salem areas. Tammy was united in marriage to the love of her life, Jerry “Jay” Armer, on May 16, 2009 in Salem, Missouri and together gifted with ten years of marriage. Tammy and Jay were blessed to share one son, Xander. Tammy’s most important job, of which she was most proud, was as a stay at home mom. Nothing brought her more joy than her son and she cherished the time spent with him. Tammy was a dedicated housewife who kept her home in order and liked spending time in the kitchen cooking. Tammy adored life and people, she never met a stranger and was a social butterfly. Tammy loved to laugh with family and friends. She enjoyed spending time outdoors at the river and watching the birds. Tammy was an animal lover; her hobbies include gardening and puzzles. Tammy passed away on January 3, 2021, at her home in Salem, Missouri at the age of forty years. She leaves behind to cherish her memories, her loving husband, Jay Armer of the home; son: Xander Johnson of the home; father: Raymond Headd of Excelsior Springs, MO; sister: Dawn Day and husband Ryan of Jefferson City, MO; step-brother: Derrick Lewis of St. James, MO; step-sister: Jennifer Lewis of Rolla, MO; grandmother: Betty Wilson of Rayville, MO; mother-in-law: Linda Armer of Salem, MO; sister-in-law: Staci Armer of Salem, MO; as well as a host of nieces, nephews, cousins, other relatives, and friends. Preceding her in death, mother: Mary Lewis; stepfather: Dennis Lewis; and sister Honey Sue Headd. Tammy was one of a kind with a strong heart and beautiful smile, her memories and phone conversations will be forever treasured. Funeral Services for Tammy Sue (Headd) Armer were held Saturday, January 9, 2021 in the Wilson Mortuary Salem Chapel with Pastor Lyndell Decker officiating. Song selections played were “If I Had Only Known”, “When I’m Gone”, and “One Sweet Day”. Serving as Pallbearers were Kevin Long, Tim Shipp, Terry Long, Alvin “Buddy” Long, Rick Buell, and David Shults. Burial was in the Cedar Grove Cemetery. Arrangements were under the direction of Wilson Mortuary of Salem, Missouri. Memorial Contributions may be made in memory of Tammy Sue Armer and left at Wilson Mortuary. Online condolences may be entered at wilsonmortuary.com

Tammy Sue (Headd) Armer was born on August 27, 1980, in Kansas City, Missouri to Raymond and Mary. She grew up and attended school in the Holts Summit and Salem areas. Tammy was united in marriage to the love of her life, Jerry &#8220;Jay&#8221;... View Obituary & Service Information

The family of Tammy Sue (Headd) Armer created this Life Tributes page to make it easy to share your memories.

Send flowers to the Armer family.