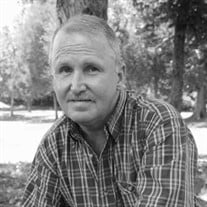 Terry Lynn Hedrick was born May 6, 1963 in Poplar Bluff, Missouri to Robert "Bob" Eugene and Dixie Mae (Plank) Hedrick and passed away September 30, 2018 in St. Francois County, Missouri at the age of fifty-five years. Terry grew up in Boss, Missouri and attended Viburnum High School. Terry was formerly married to Neda Hedrick to which daughter Jessica was born. He was also formerly married to Delilah Halbert. Terry was baptized and was a member of Salem Church of Christ and attended Boss Assembly of God Church for several years. Terry and his father, Bob, owned Hedrick's Sawmill, which was operated by father and son only. Once it sold they purchased a farm in Boss and after Bob's passing, the farm was passed on to Terry. He farmed and worked at Doe Run for several years. Terry retired from Doe Run in 2010 and worked on the farm until he retired to Lake of the Ozarks in 2011. Terry loved hunting deer and turkey, fishing for trout, bass, and crappie every chance he got. He enjoyed camping at Montauk State Park, riding the ranger on the farm, and watching TV. Most importantly, he loved spending time with his family and watching his grandchildren, Raylen and Colten, grow. He also loved Christmas. Terry bought red roses for his loved ones every holiday, never mattered what holiday. His favorite color was red and he was very proud to own his dream truck. Preceding him in death were his parents, Bob and Dixie Mae Hedrick; brother, Robert "Robbie" Eugene Hedrick, Jr.; and sister, Carletta Lynn Price. Survivors include his daughter, Jessica Lynn Emory and husband, Rick of Salem; daughter-in-love, MacKenzie Thompson of Salem; grandsons, Raylen Lane Stockton of Salem and Colten Lane Stockton of Salem; sister, Robin Wisdom and husband, Jim of Boss; dear friends, Rick Emory Sr. and family of Salem, Neda Hedrick of Salem, Warner Thompson of Salem; and Special Companion, Delilah Halbert of Salem. Terry will be fondly remembered and greatly missed by all who knew and loved him. Funeral service for Terry Lynn Hedrick was held Saturday, October 13, 2018 at Wilson Mortuary Salem Chapel with Pastor Paul Davis officiating, a eulogy was given by Jessica Emory and special recorded selections were played. Serving as pallbearers were, Steve Parker, John Nolan, Arthur Frago, Travis Caringer, Andy Dunn, and Warner Thompson, honorary pallbearers were, Rick Emory, Jr. and Rick Emory, Sr. Burial was in the Boss Cemetery.

Terry Lynn Hedrick was born May 6, 1963 in Poplar Bluff, Missouri to Robert "Bob" Eugene and Dixie Mae (Plank) Hedrick and passed away September 30, 2018 in St. Francois County, Missouri at the age of fifty-five years. Terry grew up in Boss,... View Obituary & Service Information

The family of Terry Lynn Hedrick created this Life Tributes page to make it easy to share your memories.

Send flowers to the Hedrick family.