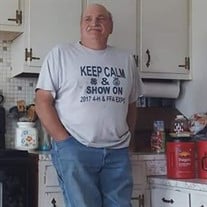 Thomas "Tom" Matthew Koehnen was born on May 19, 1961, in Shakopee, Minnesota to Joseph Matthew and Leila May (Heitkamp) Koehnen and passed away on August 22, 2021 in Salem, Missouri at the age of sixty years. Tom was one of three children who grew up in Carver/Chaska Minnesota. He graduated from high school in Chaska, Minnesota and worked there many years before relocating to Gunnison, Colorado, then to Grand Junction, Colorado where he met his sweetheart Kathy. Tom and Kathy moved to Missouri to be closer to family and were united in marriage on October 25, 2003 at the Salem Wood Products Chapel. Tom was a good, honest hard-working man. He held several jobs through his working years including Salem Wood Products, Doe Run, Recycling Plant, and Buick Mines as a maintenance mechanic. Tom was a natural born tinkerer and could fix anything mechanical to electrical to plumbing. He enjoyed working with his cattle and was proud of his farm. Tom was an avid outdoorsman and loved camping, fishing, and target shooting. He looked forward to deer hunting every fall and made good natured bets about tagging the biggest buck. Tom made friends easily with his good nature and big heart. His dog, Precious, held a special place in his heart and was his sidekick for many years. Tom’s whole family was most important to him and he treasured time spent with them; he especially cherished his grandchildren. Tom was of the Catholic faith. Tom is survived by his loving wife Kathy Koehnen of the home; daughter: Katarina Morris of Salem, MO; step-children: Christina Higgs and husband Cory of Salem, MO, April Hassler of Salem, MO, and Shawn Kuhn of Canyon City, CO; sisters: Susan Wherley of Green Isle, MN, and Diane Helmer of New Prague, MN; uncle: Dale Heitkamp of Bel Air, MD; grandchildren: Blaklee Kuhn, Destany Kuhn and fiancé Austin, Kiara Kuhn and fiancé Dallas, Drason Higgs, Abby Kuhn; two great-granddaughters: Ashlyn and Elly; as well as a host of nieces, nephews, cousins, other relatives and friends. Preceding him in death, parents: Joseph and Leila (Heitkamp) Koehnen; and brother-in-law: Vincent Wherley J.R.; as well as many aunts and uncles. Tom will be remembered for his kind nature and love he had for his family and friends. He will be forever remembered and deeply missed. Funeral Services for Thomas “Tom” Matthew Koehnen were held Friday, August 27, 2021 in the Wilson Mortuary Salem Chapel with Aaron Steelman officiating and Katrina sharing the eulogy. Song selections played were “For My Daughter”, “I Wish Grandpas Never Died”, and “God’s Country”. Serving as Pallbearers were J Clark, Jay Vavak, Fred Bozic, Randy Bowen, John Mabe, and Butch Russell. Honorary Pallbearers were Austin McCall, Dallas White, Cory Higgs, and Lonnie Southards. Burial was in the Jadwin Cemetery. Arrangements were under the direction of Wilson Mortuary of Salem, Missouri. Memorial Contributions may be made in memory of Tom Koehnen and left at Wilson Mortuary. Online Condolences may be entered at www.wilsonmortuary.com

Thomas "Tom" Matthew Koehnen was born on May 19, 1961, in Shakopee, Minnesota to Joseph Matthew and Leila May (Heitkamp) Koehnen and passed away on August 22, 2021 in Salem, Missouri at the age of sixty years. Tom was one of three children... View Obituary & Service Information

The family of Thomas Matthew Koehnen created this Life Tributes page to make it easy to share your memories.

Send flowers to the Koehnen family.