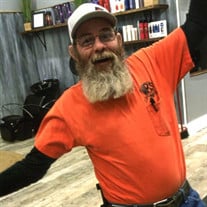 Timothy "Joe" Joseph Wofford was born July 13, 1961 in Salem, Missouri to Louie Marvin and Rozella (Pace) Wofford. He was one of six children and grew up on the family's farm in Salem as well as Bridgeton. Joe attended Pattonville School from his elementary years through high school. Joe had a strong work ethic instilled in him from an early age. Through the years he held plumbing jobs in Salem and Florida. He attended school for certification to work on Harley Davidson motorcycles. Joe's most recent job was working in the oil fields in Texas. Joe's passion was traveling the country on his Harley Davidson. He loved riding to the Sturgis Motorcycle Rally in North Dakota each year and visiting with fellow bikers. His most recent trip was to New York. Joe had the gift of being mechanically minded and could fix anything and was always willing to work on his friend’s motorcycles. He was proud to participate with the American Legion Riders which is known for their charitable work. Joe's involvement with AA was special to him, as he recently received his twenty-one-year chip. Joe loved spending time with family and friends and cherished memories made with each of them. Joe departed this life November 27, 2021 in Salem, Missouri at the age of sixty years. He leaves behind to cherish his memories, loving daughter: Chelsea Wofford of Salem, MO; siblings: Louie Wofford Jr. and wife Lynn of Salem, MO, Mike Wofford and wife Glenda of Salem, MO, Debbie Johnson and husband Buddy of Watson, LA, Ron Wofford and wife Jenean of Warrenton, MO, and Tony Wofford of Tampa, FL; two grandchildren: Charliee Sue Wofford and Luke Freeman; special friend: Pat Booker of Salem, MO; as well as many nieces, nephews, other relatives and friends. Preceding him in death, his parents: Louie Sr. and Rozella Wofford Joe was a great man and will be remembered for his ability to make people laugh. He will be forever missed by all who knew and loved him. Celebration of Life for Timothy Joseph “Joe” Wofford was held Saturday, December 18, 2021 in the Wilson Mortuary Salem Chapel with Buddy Johnson and Aaron Steelman officiating. Song selections played were “Spirit in the Sky”, “High Cost of Living”, and “Give Heaven Some Hell”. Arrangements were under the direction of Wilson Mortuary of Salem, Missouri. Memorial Contributions may be made in memory of Joe Wofford to the American Legion Post 99 and left at Wilson Mortuary. Online condolences may be entered at wilsonmortuary.com

Timothy "Joe" Joseph Wofford was born July 13, 1961 in Salem, Missouri to Louie Marvin and Rozella (Pace) Wofford. He was one of six children and grew up on the family's farm in Salem as well as Bridgeton. Joe attended Pattonville School from... View Obituary & Service Information

The family of Timothy "Joe" Joseph Wofford created this Life Tributes page to make it easy to share your memories.

Send flowers to the Wofford family.