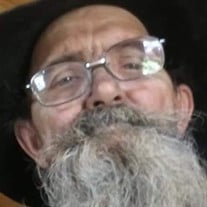 Tony "Dale" Weber Jr. was born December 26, 1957 in Salem, Missouri to Tony Dale Sr. and Della Eileen (Fears) Weber and passed away September 28, 2019 in Shannon County, Missouri at the age of sixty-one years. Dale was raised in Timber, Missouri and attended school there. He was united in marriage to Rose Marie Seelye on September 10, 1978 and the two were blessed with twelve years of marriage until her passing in 1990. He then met and married Peggy in July of 1991 and they were blessed with several years of marriage until her passing. Dale and Kimberly Galloway were united in marriage on October 20, 2008 in Eminence, Missouri and shared ten wonderful years of marriage together. He was blessed with three children: Jeremey, Sara and Jennifer. Dale worked at Royal Oak Enterprises as well as in the Timber Industry. He was very handy with all types of mechanic work, especially on a Chevy. Dale was willing to lend a helping hand to anyone who needed it. He was a "Jack of all Trades" and mastered most of them. In his spare time, Dale enjoyed tinkering on his McCuloch Chainsaw, riding his Kawasaki Motorcycle, watching wrestling on TV, attending the car derby, deer hunting and his fishing trips with friends and family. Some of Dale's biggest passions were spending quality time with his friends and family, he knew how to put a smile on their face. Most of all he enjoyed the memories made with his grandchildren. Preceding him in death, were his father: Tony Dale Weber Sr., wives: Rose and Peggy Weber and special friend: Bradley Lovell. Dale is survived by his loving wife: Kimberly Weber of Winona, MO; three children: Jeremey "Scott" Weber and wife Samantha of Salem, MO, Sara Beth Pollard and husband Matthew of Salem, MO and Jennifer Weber and Terry of Rolla, MO; mother: Della Weber of Salem, MO; five siblings: Eileen Durham of Jadwin, MO, Benny Weber of Salem, Mo, Cheryl Weber of Salem, MO, Glen Weber and wife Connie of Salem, MO and Rick Mansfield of Ellington, MO; six grandchildren: Thomas Alterauge, Jasper Weber, Harley Artrip, Collier Artrip, Levi Weber and Kyleigh Hussey; as well as several nieces, nephews, cousins, extended family, and friends. Dale was a wonderful husband, father, grandfather and friend. He will be greatly missed by all who knew and loved him. Funeral Service for Tony "Dale" Weber Jr. were held Friday, October 4, 2019 in the Wilson Mortuary Salem Chapel with Pastor Rick Mansfield officiating. Song selections played were "409", "Even Though I'm Leaving" and "I'll Fly Away". Serving as Pallbearers were "Leland Edwards, Dennis Quick, Don Durham, Scott Weber, Ron Lundy and Derek Flowers. Honorary Pallbearers were Terry Hussey, Slade Weber, Mark Punkey, Harely Artrip, Shawn Smith, Jasper Weber and Terry Voyles. Burial was in the Weese Cemetery. All arrangements were under the direction of Wilson Mortuary of Salem.

The family of Tony "Dale" Weber Jr. created this Life Tributes page to make it easy to share your memories.

Send flowers to the Weber family.