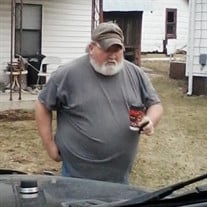 Troy Duane Phillips was born December 21, 1966, to William Glenn and Margie Louise (Parker) Phillips in Columbia, Missouri. He was raised in Salem and attended Salem High School. Troy loved spending time with his family. He was a proud uncle and treasured his nieces and nephews and their families. Troy was a hard-working man and worked until his health no longer allowed it. Throughout the years he has worked at the mines, Knight and Maher as a tow truck operator and the City of Salem as a heavy equipment operator. Troy was mechanically inclined and liked tinkering around. Some of his favorite projects were on a 1952 GMC truck and a 1947 Chevy. He enjoyed the simple things in life and looked forward to a good cup of McDonald's coffee. Troy was quite the jokester with a unique sense of humor and loved sharing his laughter with those around him. Troy departed this life April 13, 2022, in Salem, Missouri at the age of fifty-five years. He leaves behind to cherish his memory, siblings: Rick Phillips and wife Donna of Salem, MO, Lisa Blackwell and husband Duane of Salem, MO, Bobby Jarvis and Sarah Martin of Salem, MO, Darrel Jarvis and wife Lana of Rolla, MO, and Vicki Topper and husband Danny of Texas; nieces and nephews: Brady Adams and wife Micah, Ben Adams and wife Mikaela, Brooke Adams and significant other Dalton Sanders, and Lucas Blackwell; great-nieces and nephews: Cade, Finley, Remmie, and Stetson; several additional nieces and nephews; extended family, and dear friends. Preceding him in death, his parents: William and Margie Phillips. Troy was a fun-loving and caring brother, uncle, and friend. His friendly spirit will be remembered by those who loved him most. Funeral Services for Troy Duane Phillips were held Monday, April 18, 2022, in the Wilson Mortuary Salem Chapel with Pastor Jim Privett officiating. Special Music was provided by the Boxx Brothers. Serving as Pallbearers were Rick Phillips, Duane Blackwell, Brady Adams, Ben Adams, Lucas Blackwell, and Richard Wilson. Honorary Pallbearers were Darrel Jarvis and Bobby Jarvis. Burial was in the Cedar Grove Cemetery. Arrangements were under the direction of Wilson Mortuary of Salem, Missouri. Memorial Contributions may be made in memory of Troy Phillips and left at Wilson Mortuary. Online Condolences may be entered at www.wilsonmortuary.com

Troy Duane Phillips was born December 21, 1966, to William Glenn and Margie Louise (Parker) Phillips in Columbia, Missouri. He was raised in Salem and attended Salem High School. Troy loved spending time with his family. He was a proud uncle... View Obituary & Service Information

The family of Troy Duane Phillips created this Life Tributes page to make it easy to share your memories.

Send flowers to the Phillips family.