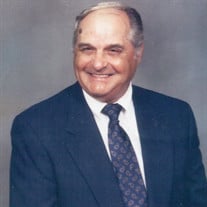 Veigh Edward Hogan was born at home on March 20, 1932, in Dent County, Missouri. His parents were John Edward and Rachel Corbel (Martin) Hogan. Some of his happiest memories were growing up near Barnes Fork with his brother and sisters. At the young age of fifteen, Veigh started his working career with the Terminal Railroad in St. Louis, Missouri. He had a strong work ethic and worked hard to provide for his family. Veigh retired in 1977 after thirty-two years of dedication. Veigh was united in marriage to his sweetheart, Ina Gale Dooley, on April 15, 1976 in Salem, Missouri, and together shared forty-six years of love, laughter, and lasting memories. Veigh and Gale were blessed to share five children: Susan, Veigh Jr., Linda, Michael, and Steven. In 1977, Veigh and Gale moved to the family farm in Salem. Veigh was a farmer and loved the farming life. He especially loved spending time in the fields and working on the tractor. Veigh ran a cow-calf operation, he was also a feed salesman for MoorMan’s Feed Company. Veigh was committed to the farming life for twenty-seven years before moving closer to town. Veigh was a man of faith and member of Dry Fork Baptist Church where he enjoyed attending Sunday School and Sunday Worship. His faith and his family were most important to him. Veigh loved his family deeply and was known as the family financial advisor. He treasured making memories with his grandchildren, great-grandchildren, and great-great-grandchildren. Veigh entered into eternal rest on May 29, 2022, in Salem, Missouri at the age of ninety years. He leaves behind to cherish his memory, loving wife Gale Hogan of Salem, MO; children: Susan LaJeunesse and husband Alan of Marthasville, MO, Veigh Edward Hogan Jr. and wife Tricia of Marthasville, MO, Linda Gibbs and husband Lewis of Salem, MO, Michael Presley and wife Yvonne of Salem, MO, and Steven Presley and wife Guillermina of the Virgin Islands; sister: Betty Gray of Salem, MO; sisters-in-law: Faye Johns of Creve Coeur, MO and Joy Pryor of Sullivan, MO; brother-in-law: Philip Dooley and wife Laura of Columbia, MO; special niece: Janet Hogan Hagler of Richwoods, MO; daughter-in-law: Deborah Hogan of Hazelwood, MO; seven grandchildren; seven great-grandchildren; four great-great-grandchildren; as well as a host of nieces, nephews, other relatives, and dear friends. Preceding him in death, father: John Edward Hogan; mother: Rachel Corbel Martin; brother: Vernon Lee Hogan; and sister: Joyce Akers. Veigh has left his family countless and unforgettable memories to hold onto. His legacy of strength, honor, and love leaves a lasting impression on those whose lives he touched. Veigh will be forever missed. Funeral Services for Veigh Edward Hogan were held Friday, June 3, 2022 in the Wilson Mortuary Salem Chapel with Pastor Joe Hubbs and Philip Dooley officiating. Song selections played were “Peace in the Valley”, “Precious Lord, Take My Hand”, “Go Rest High on That Mountain”, and “How Great Thou Art.” Serving as Pallbearers were Matthew Presley, Joshua Cowen, Danny Akers, Dwayne DeClue, Wayne Leesmann, Randy Merrit, Mike Summers, and Steve Presley. Honorary Pallbearers were Michael Presley, Kevin Presley, and Joel Pujols. Burial was in the Dry Fork Cemetery. Arrangements were under the direction of Wilson Mortuary of Salem, Missouri. Online condolences may be entered at www.wilsonmortuary.com

Veigh Edward Hogan was born at home on March 20, 1932, in Dent County, Missouri. His parents were John Edward and Rachel Corbel (Martin) Hogan. Some of his happiest memories were growing up near Barnes Fork with his brother and sisters. At... View Obituary & Service Information

The family of Veigh Edward Hogan created this Life Tributes page to make it easy to share your memories.

Send flowers to the Hogan family.