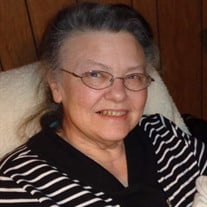 Vella Marie (Ross) Harrison was born September 20, 1953 in Texas to Jack and Margurette Ellen (Townsend) Ross. As a young girl, Vella moved around frequently due to her father’s job, she spent most of her childhood in Nebraska. After high school, Vella furthered her education and obtained her associates degree. Vella was united in marriage to her sweetheart, Dean Leroy Harrison, October 21, 1974 in Milford, Nebraska and shared forty-seven years of memories together. Vella and Dean were blessed with five sons: Colin, Jeffery, Dennis, Kenneth, and Alex and later adopted: Sam, Luke, Adam, and Jake. In her early working years, Vella worked for the U.S. Government as a Key Punch Operator until she became a dedicated homemaker. Vella took great pride in raising her family and keeping her home in order. She enjoyed spending time in the kitchen cooking and baking. Her hobby, that she absolutely loved, was raising dogs. Vella lived a wonderful life devoted to God and her family. She loved unconditionally and always put others before herself. Her happiest moments were the ones spent with those she loved. Vella cherished her grandchildren and treasured the memories they made together. Vella departed this life November 12, 2021 in Salem, Missouri at the age of sixty-eight years. She leaves behind to cherish her memories, loving husband Dean Harrison of Jadwin, MO; sons: Colin Harrison and wife Crissy of Friedheim, MO, Jeffery Harrison and wife Raimie of Seward, NE, Dennis Harrison of Exeter, NE, Kenneth Harrison and wife Amy of Jadwin, MO, and Alex Harrison and wife Laura of Jadwin, MO; adopted children: Sam Hyde, Luke Hyde, Adam Hyde, and Jake Wostrel; siblings: Sharon Divis and husband Gary of Rolla, MO, Aaron Ross and wife Diane of Columbus, NE, Gary Ross and wife Carla of Springview, NE and Lela Frerichs and husband Dan of Holdrege, NE; many grandchildren; and a host of nieces, nephews, cousins, extended family, and dear friends. Preceding her in death, parents: Jack and Margurette Ross. Vella will be remembered for her strength, beauty, and kindness. Her love for family was unshakable and she had a positive and lasting impact on those who were blessed to know her. Vella will be forever missed. Funeral Services for Vella Marie (Ross) Harrison were held Tuesday, November 16, 2021 in the Wilson Mortuary Salem Chapel with George Peterson, Steve Marshall, Bertha Magsum, and Arlene Leszewski officiating. Congregational Hymns sung were “Life’s Short Day” and “Leave Me Not Alone”. Serving as Pallbearers were Brianna, Benjamin, Latham, Cammie, Devin, Sam, Prosper, Felicity, Adrianna, Savanna, and Harlie. Honorary Pallbearers were Beckett, Genevieve, and Mack. Burial was in the Gladden Empire Cemetery. Arrangements were under the direction of Wilson Mortuary of Salem, Missouri. Online Condolences may be entered at www.wilsonmortuary.com

Vella Marie (Ross) Harrison was born September 20, 1953 in Texas to Jack and Margurette Ellen (Townsend) Ross. As a young girl, Vella moved around frequently due to her father&#8217;s job, she spent most of her childhood in Nebraska. After high... View Obituary & Service Information

The family of Vella Marie (Ross) Harrison created this Life Tributes page to make it easy to share your memories.

Send flowers to the Harrison family.