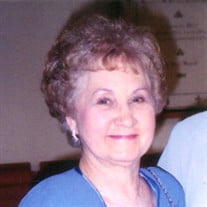 Velma Imogene (Nash) Griffith was born February 7, 1932 in Bunker, Missouri to Sam and Mary Lou (Watson) Nash and passed away March 3, 2020, at Cuba Manor at the age of eighty-eight years. Velma was one of eleven and grew up in Bunker. She was blessed with four children: Barbara, Patti, Linda, and Jeff. Velma loved her children very much and worked hard to provide for them. Throughout her life, Velma was a seamstress at Barad's Lingerie. She was excellent at what she did and used her talented hands in many ways. Velma was strong in her faith; she was a fierce prayer warrior and a longtime member at Steelville First Assembly of God. She loved to read her Bible and sincerely lived out her faith in Christ daily. Velma had a “green thumb” and grew all kinds of plants and flowers. She was very passionate in studying nutrition and enjoyed listening to music. Above all, Velma had a special place in her heart for her family, especially her grandchildren and great-grandchildren. She cherished her time spent with them. Velma is survived by four children: Barbara Bennett and husband Phil of New Bern, NC, Patti Crowder and husband Barry of Lancaster, SC, Linda Whitlock and husband Randy of Marengo, IL, and Jeff Edmison and wife Rhonda of Upton, MA; one brother: Sam Nash and wife Phyllis of Peoria, IL; eleven grandchildren: Misty, Sarah, Jennifer, Chad, Natalie, Chelsea, Alyssa, Matthew, Kristi, Joshua, Bridgette; several great-grandchildren; extended family and friends. Preceding her in death were, her parents: Sam and Mary Lou Nash; seven sisters: Alma Jordan, Alice Beers, Nora Bay, Merlene Emory, Mildred Luttrell, Bertie Morgan, and Earlene Camden; and two brothers: Jessie Nash and Hubert Nash. Velma lived life to the fullest and will be remembered as a loving wife, mother, grandmother, great-grandmother and friend. She will be deeply missed by all who knew and loved her. Funeral Services for Velma Imogene (Nash) Griffith were held Wednesday, March 11, 2020 in the Wilson Mortuary Salem Chapel with Pastor Jerry Beers officiating. Song selections played were “Where We’ll Never Die” and “I Call it Home”. Serving as Pallbearers were Jeff Edmison, Randy Whitlock, Barry Crowder, and Matthew Whitlock. Honorable Pallbearer was Phil Bennett. Burial was in the Cedar Grove Cemetery. Arrangements were under the direction of Wilson Mortuary of Salem, Missouri.

Velma Imogene (Nash) Griffith was born February 7, 1932 in Bunker, Missouri to Sam and Mary Lou (Watson) Nash and passed away March 3, 2020, at Cuba Manor at the age of eighty-eight years. Velma was one of eleven and grew up in Bunker. She... View Obituary & Service Information

The family of Velma Imogene (Nash) Griffith created this Life Tributes page to make it easy to share your memories.

Send flowers to the Griffith family.