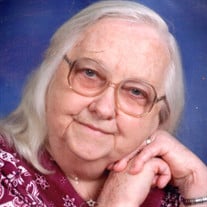 Verla Joyce (Jones) Blue was born on July 25, 1933 in Iberia, Missouri to Clark and Ethel (Pendelton) Jones and passed away October 29, 2019 at her home in Salem, Missouri at the age of eighty-six years. Verla grew up and attended school in Iberia, Missouri. On August 1, 1950 in St. Louis she married the love of her life Leroy Blue. Together they shared fifty-three years of marriage and were blessed with eleven children: Randall, Gregory, Daryl, Bobby, Vicki, Dennis, Ricky, Tracy, Cynthia, David, and Valerie. Verla loved being a wife and homemaker, and she thrived at both. She was an accomplished cook and her children all fondly remember a favorite dish. Verla was an avid salt and pepper shaker collector owning hundreds of unique designs. She was an amazing person who impacted the lives of many. Verla was a true example of a mother, grandmother and great-grandmother. She cherished her time spent with her children and treasured her grandchildren. Verla was a passionate and devoted pet lover; she enjoyed time spent with her birds, fish and dog "Teddy". When she wasn't busy with her family, she stayed busy with her flowers and yard decorations. She enjoyed watching Nascar races and football games. Verla was a long-time member of Second Baptist Church of Salem and enjoyed attending Sunday School and Worship. Verla was preceded in death by her husband: Leroy Blue; daughter: Cynthia Sidwell; her parents: Clark Jones and Ethel Davidson and her brother: Herbert Jones. Verla is survived by her children: Randall Blue, Gregory Blue, Daryl Blue, Bobby Blue, Vicki Myers, Dennis Blue, Ricky Blue, Tracy Shepard, David Blue and Valerie Blue; many grandchildren; several great-grandchildren; one great-great-grandchild; nieces, nephews, extended family and friends. Verla was a wonderful, loving and strong mother and grandmother. She lived to the fullest and will be deeply missed. Funeral Service for Verla Joyce Blue was held Saturday, November 2, 2019 in the Wilson Mortuary Salem Chapel with Pastor Larry Nash officiating. Song Selections played were "Precious Memories", "Earths Lost, Heavens Gain", "I Can Only Imagine" and "Go Rest High on that Mountain". Serving as Pallbearers were: Dennis Blue, Bob Blue, Randy Blue, David Blue, Bob Blue Jr. and Shawn Blue. Burial was in the Cedar Grove Cemetery. All arrangements were under the direction of Wilson Mortuary of Salem, Missouri.

Verla Joyce (Jones) Blue was born on July 25, 1933 in Iberia, Missouri to Clark and Ethel (Pendelton) Jones and passed away October 29, 2019 at her home in Salem, Missouri at the age of eighty-six years. Verla grew up and attended school... View Obituary & Service Information

The family of Verla Joyce Blue created this Life Tributes page to make it easy to share your memories.

Send flowers to the Blue family.