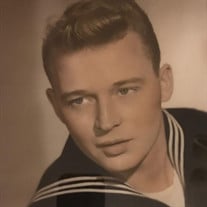 Vernon Ray Robinson was born on May 5, 1930 to Ray and Madeline (Brooks) Robinson in St. Louis, Missouri and passed away on May 23, 2021 at his home in Salem, Missouri at the age of ninety-one years. Vernon grew up and attended school in St. Louis. He entered the United States Navy at the age of eighteen and served his county faithfully until his honorable discharge. While in the Navy, Vernon worked as a military police officer and worked as a mechanic on Blue Angel jets. During that time, he also enjoyed training greyhound dogs for the racetrack. Vernon was united in marriage to the love of his life, Mary Lou Halbrook on May 3, 1952 in Salem, Missouri and together shared fifty years of memories until her passing on December 6, 2002. Vernon and Mary Lou were blessed with six children: Ron, Kathy, Marty, Larry, Sharon, and Greg. Vernon was a devoted husband and dedicated father to his children. Vernon started working for the American Can Company at a young age. He started as a janitor sweeping floors and through his career with the company, he worked up the ranks to become the Plant Manager. With this position he and his family traveled around America setting up different plants for the company. Vernon was an amazing leader for this company, his moto for his career was, “If a company treats their employees well, your employees will treat the company well.” Upon retirement, Vernon and Mary Lou returned to his home state where he lived out the rest of his days working on the family farm. Vernon enjoyed spending time outdoors but truly valued the time spent with his family, especially his grandchildren and great-grandchildren. Vernon is survived by his loving children: Ron Robinson and Peggy of California, Kathy Robinson-Black and husband Marvin of Salem, MO, Marty Robinson of California, Larry Robinson of Salem, MO, Sharon Skelly and husband Alan of Pennsylvania, and Greg Robinson and wife Beverly of Salem, MO; one sister: Barbara Walsh and husband Mike; eight grandchildren; four great-grandchildren; as well as many nieces, nephews, other relatives, and friends. Vernon is preceded in death by his wife: Mary Lou Robinson; parents: Ray and Madeline Robinson; and aunt: Helen. Vernon was a loving son, husband, father, grandfather, and great-grandfather. He will be missed by all. However, we can find peace in the fact that he has been reunited with the love of his life in heaven. Funeral Services for Vernon Ray Robinson were held Friday, May 28, 2021 in the Wilson Mortuary Salem Chapel with Pastor Mark Johnson officiating. Special Music was provided by Dennis Pewitt. Serving as Pallbearers were Ron Robinson, Marty Robinson, Greg Robinson, Sean Robinson, Beverly Robinson, and Bejay Barton. Honorary Pallbearers were Alan Skelly, Jessie Robinson, Kyle Robinson, Craig Skelly, Chad Skelly, Tristen Skelly, and Ryan Robinson. Military Honors was provided by the United States Navy and American Legion Post 99. Burial was in the Miner Cemetery. Arrangements were under the direction of Wilson Mortuary of Salem, Missouri. Memorial Contributions may be made in memory of Vernon Robinson to the charity of your choice and left at Wilson Mortuary. Online condolences may be entered at wilsonmortuary.com

Vernon Ray Robinson was born on May 5, 1930 to Ray and Madeline (Brooks) Robinson in St. Louis, Missouri and passed away on May 23, 2021 at his home in Salem, Missouri at the age of ninety-one years. Vernon grew up and attended school in St.... View Obituary & Service Information

The family of Vernon Ray Robinson created this Life Tributes page to make it easy to share your memories.

Send flowers to the Robinson family.