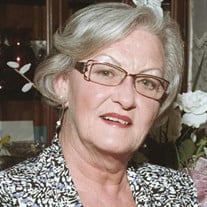 Not sure what to send?

Veronica J. Hambacker (Nash) was born July 6, 1947 and departed this life May 25, 2022 with her loving husband and son by her side. Veronica Jane was born to the late Jesse David (Bud) Nash and Delola Francis (Stricklin) Nash in Bunker, MO on July 6, 1947. She was brought into this world by her midwife Grandmother, the late Zilla (Woolf) Nash. Veronica attended the rural elementary school at Crossville MO and was a graduate of the 1964 class of Bunker R-III. She received her BA degree in English from the University of Missouri, Columbia in 1969. She received her MS degree in English Education from Southeast Missouri State University in 1979. She began teaching various elementary classes at Bunker R-III School from 1969 through 1974, continued teaching Junior High English at Iron County C-4 in Viburnum from 1974 to 1999, and ended her teaching career at Northwood R-IV from 1999 to her retirement in 2005. During her career she was a beloved teacher, touching the lives of generations of students. By serving in many capacities, including President, of the Missouri State Teachers Association, then serving on the board for the Missouri Retired Teachers Association, and as president of the local Dent County Retired Teachers Association, she served generations of teachers as well. Her life was dedicated to serving and loving her fellow man. Veronica loved her students dearly and that was reciprocated. She worked tirelessly to improve conditions for Missouri teachers and retired teachers. Hers was truly a life well lived and her legacy will live on for countless generations into the future. On February 14, 1990, Veronica married John Hambacker. To this union one son, her pride and joy, Jonathan Bryce Hambacker was born July 2, 1992. Veronica was preceded in death by her grandparents, John and Ellen Nash, and Burley and Zilla Stricklin, parents, Bud and Delola Nash, two husbands, Eldon Mosby and Lee Braidlow, one brother and sister-in-law, Richard and Shirley Nash and one sister and brother-in-law, Victoria and Mike Ruble. Veronica is survived by her husband John Hambacker of Salem, MO, son Jonathan Hambacker and Cheryl Chau of Washington D.C., step-son Mark Hambacker and wife Susan of Sugarhill GA, step-daughter Julie Suttmoeller and husband Dennis of Florissant, MO, eight grandchildren: Sydney, Erica, Cole, Clayton and Samantha Hambacker of Sugarhill GA, and Violet, Dean and Kurt Suttmoeller of Florissant MO, two sisters, Phyllis (Penny) Cook of Arnold, MO and Francine Copeland of Maynard, AR, two brothers, Pat Nash and wife Bernadean of Salem, MO, and Roger Nash and wife Kim of Dixon, MO, and two brothers-in-law Kurt Hambacker of Rolla, MO and Greg Hambacker and wife Claudia of Boise, ID. She has a host of adored nieces and nephews, great-nieces and nephews, and countless numbers of cousins. Veronica was a loving wife and devoted mother. She was a loving daughter, sister, aunt, and grandmother. She will be lovingly remembered and dearly missed. A Celebration of Life will be held at the Salem Armory / TCRC on July 2, 2022, from 12:00 - 3:00 pm. Please make donations rather than sending flowers. Since she was an educator, please donate to: MRTA Foundation (supports teacher classroom projects) 3030 DuPont Circle, Jefferson City, MO 65109

Veronica J. Hambacker (Nash) was born July 6, 1947 and departed this life May 25, 2022 with her loving husband and son by her side. Veronica Jane was born to the late Jesse David (Bud) Nash and Delola Francis (Stricklin) Nash in Bunker, MO... View Obituary & Service Information

The family of Veronica Jane (Nash) Hambacker created this Life Tributes page to make it easy to share your memories.