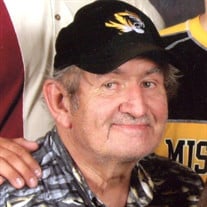 Vincent Davis Morago was born July 19, 1943 in Santa Barbara, California and departed this life December 31, 2021 in Salem, Missouri at the age of seventy-eight years. Vincent grew up in California and at the age of seventeen enlisted into the United States Navy. He served his country faithfully until his honorable discharge. Vincent was hard-working, honest, and respected. He took great pride in helping others and throughout his working career was employed with several janitorial service jobs. Vincent retired from the hospital after many dedicated years. Vincent was united in marriage to Geneva Thornburg while in California and shared many memories together. Vincent and Geneva were blessed with five children: Michael, Virginia, Lori, Christopher, and Vance. His family was important to him and he treasured the time spent together, especially with his grandchildren. Vincent was a sports enthusiast. He loved watching wrestling and liked to watch the St. Louis Cardinals and Kansas City Chiefs play. Vincent was an avid bowler and enjoyed bowling on several leagues. He had a genuine passion in helping others and helped serve with several young outreach programs. Vincent leaves behind to cherish his memory, his loving children: Michael Morago and wife Joy of Salem, MO, Virginia Morago of Eldon, MO, Lori Wofford and fiancé Paul Skelton of Salem, MO, and Christopher Morago and fiancé Amy Wood of Salem, MO; special friend: Geneva Owens of Salem, MO; many wonderful grandchildren; extended family and dear friends. Preceding him in death, son: Vance Morago. Vincent will be forever loved but not forgotten. His memory will live on in the lives he has touched along the way. Funeral Services for Vincent Davis Morago were held Tuesday, January 11, 2022 in the Wilson Mortuary Salem Chapel with Pastor Charlie Younger officiating. Song selections played were “Amazing Grace” and “Go Rest High On That Mountain”. Burial with Military Honors was held Wednesday, January 12, 2022 at the Jefferson Barracks National Cemetery. Serving as Pallbearers were Christopher Morago, Kyle Wofford, Cody Wofford, Michael Morago, James Dakin, Jessie Dakin, Kendra Morago, and Dezirae Morago. Honorary Pallbearers were Vance Morago Jr., J.R. Dakin, and Rene Morago. Arrangements were under the direction of Wilson Mortuary of Salem, Missouri. Memorial Contributions may be made in memory of Vincent Morago and left at Wilson Mortuary. Online condolences may be entered at wilsonmortuary.com

The family of Vincent Davis Morago created this Life Tributes page to make it easy to share your memories.

Send flowers to the Morago family.