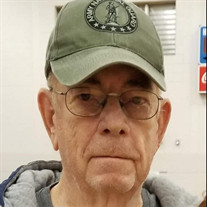 Wendell Gerald Parker was born July 14, 1940, in Greeley, Missouri to Ray Bernard and Esther Virginia (McDaniel) Parker and passed away November 9, 2019, at his home in Salem, Missouri surrounded by his loving family at the age of seventy-nine years. Wendell grew up on the family farm in Greeley and attended Crossville School near Bunker. He moved to Salem in the second grade and graduated with the class of 1959 from Salem High School. Wendell entered the United States Army National Guard on April 3, 1957, and served his country faithfully until his retirement after twenty-one years of service. During his time in the military, he was able to travel the world and for his faithful service, Wendell earned many decorations, medals, ribbons, and awards. Wendell married the love of his life, Ruth Ann Radford, on October 23, 1964, in Doss, Missouri, and together they shared fifty-five years of marriage and were blessed with three children: Sherri, Kelly, and Kristi. During his working years, Wendell was employed as a cutter with the International Shoe Company and Barad's Lingerie. He was a founding member of the Salem Collectors Club, and an avid gun and Indian relic collector. Wendell was also a skilled craftsman who loved working with his hands and creating beautiful things for the people he loved. Some of his masterpieces were miniature plows, canoes, and cabins. He also crafted bows, arrows, and quivers along with a headdress. Wendell enjoyed spending his time outdoors, and a few of his favorite memories include fishing and hunting. He cherished his time spent with family, especially his grandchildren. Wendell is survived by his loving wife Ruth Ann Parker of the home; three children: Sherri Mitchell and husband Eric of Olathe, KS; Kelly Parker and wife Angela of Salem, MO; and Kristi Steelman and husband J.D. of Salem, MO; one brother: Louie Parker and wife Faye of Jackson, MO; six grandchildren: Ashley Haas and husband John; Logan Nothaus; Braxton, Kennison, and Slayton Parker; and Quincey Steelman; three step-grandsons: Drew, Will, and Luke Christesen; two great-grandchildren: Emerson and Hudson Haas; as well as several nieces, nephews, extended family and friends. Preceding him in death were his parents, Ray and Esther Parker. Wendell leaves behind a legacy of love and a well-lived life. He will be remembered as a dedicated husband, caring father, and a loving grandfather. Celebration of Life Memorial Gathering for Wendell Gerald Parker was held Saturday, November 30, 2019, in the Wilson Family Center. Military Honors were provided by the United States Army. Honor Mission was provided by the South Central Patriot Guard. All arrangements were provided by Wilson Mortuary of Salem, Missouri.

Wendell Gerald Parker was born July 14, 1940, in Greeley, Missouri to Ray Bernard and Esther Virginia (McDaniel) Parker and passed away November 9, 2019, at his home in Salem, Missouri surrounded by his loving family at the age of seventy-nine... View Obituary & Service Information

The family of Wendell Gerald Parker created this Life Tributes page to make it easy to share your memories.

Send flowers to the Parker family.