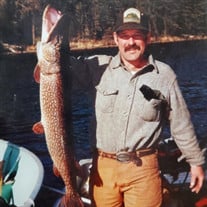 Willard "Bill" Cooper was born August 15, 1952 in Aurora, IL to Willard and Dorothy (Trapp) Cooper. He passed away at home on May 25th 2021. Bill grew up in Belvidere, IL and graduated from Belvidere High School. During high school and afterwards he worked at his dad's gas station until embarking on his life's adventures. He was in the army and completed his basic training at Fort Leonard Wood, Missouri. He was stationed around the country and served as an operating engineer in Korea. After an honorable discharge from the army, he worked a number of jobs including Canadian fishing guide and carpenter until meeting "his bride" Sandy Cooper. It took about a year to convince her to actually agree to the title and they were married on May 6, 1978. After an extended "honeymoon" at Sandy Beach, they moved to eastern Montana and together worked on a series of ranches near Browning and Cutbank. After toughing out "the cold side of Montana" they moved into the mountains of Troy. Bill worked as a city cop (I know right?) and started at the ASARCO mine. He was a "hard rock miner" for the rest of his working years. He started his family in Troy and spent his time hunting, fishing, cutting firewood, and "checking out his friends shops". He included both of his children in all of this and taught them to appreciate family time and the outdoors. When ASARCO closed, he moved his family to Salem, Missouri; which, no matter where he had to work, was his home for the rest of his life. He and the "Little Dove" were happily married for 41 years, until her recent passing in 2019. Also preceding him in death were his parents Willard and Dorothy Cooper. Bill is survived by his children: Shawna Cooper and husband Kirk of Rochester, MN and Edward Cooper and wife Susan of Poplar Bluff, MO; three grandchildren: Nora Grace Severson, Collin Cooper, and Carson Cooper; his siblings Eve Cooper of Beloit, WI and brothers Doug Cooper and wife Beth of Belvidere, IL and Jim Cooper and wife Deb of Belvidere, IL; along with several nieces, nephews, and cousins. He also leaves behind his closest friends. He attracted incredible people to hike the mountains and run the rivers with. Dave Kyriss, Bruce Clark, Simon Gordon, Ron Morton, Martin Hart and others were considered part of our family. Bill never left the house without a hat and wore many throughout his life. It felt like no matter what was going on he could be counted on to know what to do. If it swam, he could catch it; if it had a season, he could hunt it; if it was broken, he could fix it. He was Uncle Bill to any kid he ever met and loved being a Grandpa more than anything. He lived a big life and leaves behind a big hole. He will be deeply missed. Private Family Services will be held at a later date. All arrangements are under the direction and care of Wilson Mortuary. Memorial Contributions may be made in memory of Bill Cooper to St. Jude Children Hospital and left at Wilson Mortuary. Online Condolences may be entered at www.wilsonmortuary.com and cards may be dropped off at Wilson Mortuary.

Willard "Bill" Cooper was born August 15, 1952 in Aurora, IL to Willard and Dorothy (Trapp) Cooper. He passed away at home on May 25th 2021. Bill grew up in Belvidere, IL and graduated from Belvidere High School. During high school and afterwards... View Obituary & Service Information

The family of Willard "Bill" Ray Cooper created this Life Tributes page to make it easy to share your memories.

Send flowers to the Cooper family.