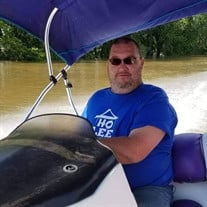 William “Bill” Joe Price was born January 1, 1971 in East St. Louis, Illinois to Russell and Glenda Sue and grew up and attended school in Madison, Illinois. Bill worked hard and always had a project going on. He was an independent contractor in New Haven, Missouri and very skilled with his hands and design of remodeling homes. Bill took great pride in his work and his customers loved him. Bill was engaged to Kendra Boehmer and together shared eight years of memories. Bill was the proud father of Cassaundra, Deanna, Christina, Dalyla, Gavin, Christian, and Kannon. His greatest enjoyment was spending time with family, especially with his children. Bill adored his two grandchildren and treasured the memories they made together. Bill liked spending time outdoors camping and boating. He had a lifelong love of motorcycles, which he enjoyed riding for most of his life along with four-wheelers. Bill enjoyed working with his hands, he liked to tinker around outside and fix things that were broken. Bill passed away April 27, 2021 in Washington, Missouri at the age of fifty years. He leaves behind to cherish his memories, his loving mother: Sue Steidle of Florida; father: Russell Price of Springfield, Illinois; fiancé: Kendra Boehmer of New Haven, MO; children: Cassaundra Vivona of Florida, Deanna Price of St. Peters, MO, Christina Price of Linn, MO, Dalyla Hurst of Berger, MO, Gavin Klinkerfuss of New Haven, MO, Christian Price of Berger, MO, and Kannon Klinkerfuss of New Haven, MO; grandchildren: Aubree and Landon; other relatives and friends. Preceding him in death, stepfather: Richard Beck; brothers: Carl Price and Richard Beck II; and sister: Kelly Salas. Bill will be forever missed by all who knew and loved him. Funeral Services for William “Bill” Joe Price were held Tuesday, May 4, 2021 in the Wilson Mortuary Salem Chapel with Pastor Dr. Justin Arender officiating. Song selections played were “When I Get Where I’m Going”, “If I Had Only Known”, “Daddy’s Hands”, and “In The Arms Of An Angel”. Serving as Pallbearers were Gavin Klinkerfuss, Christian Price, Kannon Klinkerfull, Robert Farmer, Ted Farmer, Joshua Salas, Scott Streb, Mickey Wilding, Denny Vickers, and D.J. Wilding. Burial was in the New Hope Cemetery. Arrangements were under the direction of Wilson Mortuary of Salem, Missouri. Online condolences may be entered at wilsonmortuary.com

William &#8220;Bill&#8221; Joe Price was born January 1, 1971 in East St. Louis, Illinois to Russell and Glenda Sue and grew up and attended school in Madison, Illinois. Bill worked hard and always had a project going on. He was an independent... View Obituary & Service Information

The family of William "Bill" Joe Price created this Life Tributes page to make it easy to share your memories.

Send flowers to the Price family.