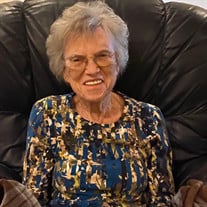 Wilma Liliva (Quick) Cook was born on October 24, 1935 in Dent County Missouri to Willie S. and Dessie L. (Prater) Quick and passed away on December 14, 2020 in Salem, Missouri at the age of eighty-five years. Wilma grew up in the Jadwin/Salem area. She was united in marriage to the love of her life, Lloyd O’Dell Cook on November 26, 1953 in Salem, Missouri and together shared fifty-three years of memories before his passing on November 26, 2006. Wilma and Lloyd were blessed with four children: Arnie, William, Cheri, and Darin. Wilma was a hard worker and worked at the International Shoe Factory until they closed and then with Hagales until she retired. She was a woman of many talents who enjoyed working with her hands; she was an avid quilter, did custom alterations, and made clothing for her children and grandchildren. Wilma also made a few wedding dresses. Wilma was a woman of faith and attended Upper Parker Community Church. She enjoyed reading and was part of a reading group at the library. Most important to Wilma was her family, she cherished the time spent with them, especially at their family reunions. Wilma treasured her grandchildren and great-grandchildren and the memories they made together. Wilma is survived by her loving children: Arnie O. Cook and wife Shericia of Salem, MO, William C. Cook and wife Sherry of Salem, MO, Cheri Ellens and husband Jon of Nixa, MO; brothers: Darrell Quick and wife Lanora, Doyle Quick and wife Janice, Delbert Quick and wife Betty, and Dennis Quick and wife Sheila all reside in Illinois; sister: Wanda Head and husband Louis of Salem, MO; many grandchildren; numerous great-grandchildren; as well as a host of nieces, nephews, other relatives, and friends. Preceding her in death were her husband: Lloyd O’Dell Cook; son: Darin Cook; parents: Willie and Dessie Quick; brothers: Gale Quick and wife Norma Jean and Kenneth “Tiny” Quick; and sister: Alma Lee. Wilma was kindhearted and would do anything for anyone. She will be deeply missed but fondly remembered by all who knew and loved her. Funeral Services for Wilma Liliva (Quick) Cook were held Saturday, December 19, 2020 in the Wilson Mortuary Salem Chapel with Pastor Mike Bell officiating. Song selections played were “Amazing Grace” and “How Great Thou Art”. Serving as Pallbearers were Billy Dan Cook, Chad Cook, Alec Fenton, Josh Quick, Jeff Brown, and John Wells. Honorary Pallbearers were Dillon Cook, Landon Cook, and Jax Cook. Burial was in the Jadwin Cemetery. Arrangements were under the direction of Wilson Mortuary of Salem, Missouri. Memorial Contributions may be made in memory of Wilma Liliva Cook to Salem Care Center and left at Wilson Mortuary. Online condolences may be entered at wilsonmortuary.com

Wilma Liliva (Quick) Cook was born on October 24, 1935 in Dent County Missouri to Willie S. and Dessie L. (Prater) Quick and passed away on December 14, 2020 in Salem, Missouri at the age of eighty-five years. Wilma grew up in the Jadwin/Salem... View Obituary & Service Information

The family of Wilma Liliva (Quick) Cook created this Life Tributes page to make it easy to share your memories.

Send flowers to the Cook family.